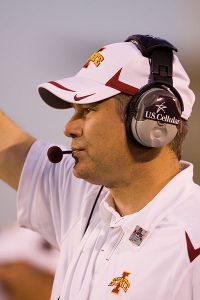 Remember when Nebraska joined the Big Ten? The reaction coming from Big 12 schools was all over the chart.

Kansas officials practically begged NU not to leave. Boone Pickens (representing Oklahoma State’s view, I guess, since he practically owns the program in Stillwater), said “What’s Nebraska got to offer?”

Well they were critics of Nebraska making the move — a strange bit of criticism coming from a fan base that has watched its Cyclones flounder for so long– especially against Nebraska.

Iowa State has won just 18 games in the series since 1896. Yet, a preview story in the Des Moines Register Wednesday somewhat lamented the end of a “rivalry,” http://dld.bz/4YKF.

Let me explain something for those Iowa State fans who have for many years fantasized about this being a rivalry. A rivalry is when two teams of equal prominence battle nearly every season for a chance at a conference championship.

No, that’s definitely not Iowa State.

Sure, Nebraska will miss having that near-automatic win on its schedule every year. And wow, we’ll really miss traveling to the middle of Nowhere, Iowa, every other year to play in one of the few stadiums in college football where it just feels like a home game on the road.

Well, now it’s Iowa State week in 2010, and there’s every reason to believe Nebraska will get the last laugh in Ames in what has been a pathetic, waste-of-time series for NU.

You know things have been bad when ISU fans were totally geeked after the 9-7 “win” in Lincoln last year. Now they look at Paul Rhoads as if he’s the second coming of — oh this one will hurt — Dan McCarney. ISU should have never let that guy get away. Afterall, he represents the “glory days” of ISU football.

In 12 seasons McCarney won just 27 conference games and lost 68. Yet he’s one of the few Cyclone coaches that has had any level of success against Nebraska. He’s virtually a legend at Iowa State with that eye-popping, all-time record of 56-85.

I’ll remind ISU fans that the Cyclones did absolutely nothing to win that game in Lincoln last year.

Let’s put it in perspective: Nebraska gave you eight turnovers, including four inside the ISU 5-yard line, and was still a field goal away from winning.

Yeah, the win at Texas a couple of weeks ago was nice, but somewhat diminished the following week when the Shorthorns lost again at home to Baylor.

That’s a nice bit of smack ISU fans can throw Nebraska’s way — ‘we beat Texas and you didn’t.’ You can have that one, Iowa State, and you can have that 52-0 loss to Oklahoma and the 68-27 loss to Utah too — Oh ouch, those had to sting.

Let me translate: Playing Nebraska this week isn’t going to be any easier.

NU will show the Cyclones just why it’s time to leave the Big 12. These one-sided games have been cramping Nebraska’s style for quite some time.

It appears the Iowa State/Nebraska game this year is heading closer to a sell-out (for ISU fans who don’t quite understand what I’m describing: It’s the same thing that’s happened on football Saturdays in Lincoln for more than 300 consectutive games, where every game ticket is sold, but I digress.)

ISU fans’ silence will be deafening.

It is as simple as this — Nebraska may never again commit eight turnovers in game, and ISU won’t be able to keep up.

Iowa State’s defense gives up an average of 433 yards a game, including 194 rushing. Nebraska comes in with the sixth-best rushing offense in the country.

In looking at the ISU offense it’s difficult to see how it can move the ball consistently against Nebraska. The Cyclones are 75th in total offense in the country, including 90th in passing offense and 40th in rushing offense.

Alexander Robinson is a good back who averages about 80 yards rushing, but is the only threat Iowa State has. Let’s see, where have we seen this before? Oh yeah, Kansas State had only Daniel Thomas and lost 48-13 at home to Nebraska. ISU quarterback Austin Arnaud has no receivers who can come remotely close to testing the Nebraska secondary.

From what Nebraska coaches have said it will be a game-time decision on whether Taylor Martinez starts at quarterback, as he continues to recover from an ankle injury suffered against Missouri last week. I think there’s a 50-50 chance Nebraska starts Zac Lee in his place, with the idea that Martinez could come off the bench if he’s needed.

Chances are Nebraska won’t need Martinez, and likely will ride running backs Roy Helu Jr. and Rex Burkhead to what should be an easy win.

Well, probably not, ISU would need to win at least six games every year.

Oh well, it was fun.

There won’t be eight turnovers in this game, as Nebraska proves a point: Nebraska 42, Iowa State 14.